L. Lasserre “If I see an opportunity to win the title, I will take it”

At some point, few weeks before the season opener in Valencia, he didn’t expect  to have a seat for the 2019 season and a few weeks ago he absolutely didn’t expect to lead the ELITE 1 points standings entering the October 20-21 Circuit Zolder Finals. Yet Lucas Lasserre now has a chance to pull off something truly extraordinary in arguably the most exciting Finals in NASCAR Whelen Euro Series history, with four contenders separated by just 12 points in the race for the Euro NASCAR title.

“If I have an opportunity to win the title, I will take it. That’s it. And it would be the best memory and accomplishment of my entire career. Alon and Frederic will feel a lot of pressure and I will be ready to take advantage,” said a relaxed Lasserre. “We don’t have the resources of the big teams, I’m doing this working as my own crew chief, with two mechanics and that makes it even more special”.

The 2010 NWES Champion found a last minute deal in March thanks to the great support of Mirco Schultis when the Mishumotors owner had to relocate to Florida due to personal reasons. Lasserre got an opportunity and with it the keys to Mishumotor’s Wiesbaden shop, the #33 and the #70 cars, two mechanics and a trailer. With such a light organization, the Pau native is acting as his own team manager and crew chief, literally sending his setup parameters via email to Germany in the weeks prior to each event and taking care of everything inside the team at the track.

Lasserre and Schultis are both enjoying this battle between their team and the Goliaths of Euro NASCAR and Mishumotors is working in a very efficient way. At Franciacorta, in May, the Frenchman collected his first win since returning to NWES with a spectacular last lap pass and got two podium finishes in the Semi Finals weekend in Hockenheim. He’s leading Alon Day by 2 points, Frederic Gabillon by 4 and Loris Hezemans by 12 in the race for the Euro NASCAR title with just two double-points races left. 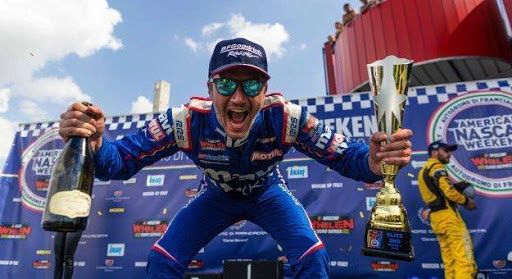